Dr. Una May is appointed CEO of Sport Ireland 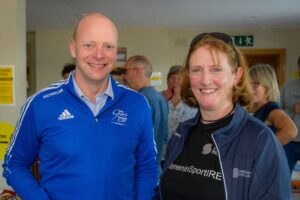 Sport Ireland has announced the appointment of Dr. Una May as their new CEO. Una has been working with Sport Ireland for over 20 years where she has gained a deep understanding of the challenges and opportunities that the participation in sport brings. From an LSP point of view, Una has been the Director of the national network of Local Sports Partnerships since 2013. She has worked tirelessly in her role to support the growth of the network and to ensure that it has gained the deserved recognition (and support) at national level. Commenting on the appointment ,John Sweeney coordinator Clare LSP said: ‘ Through various national committees and day to day operations, I have worked closely with Una since 2001 and I am delighted that she has been appointed as the new CEO. On behalf of Clare LSP, I would like to offer Una our sincere congratulations and success in her appointment, and I am are looking forward to  seeing her in Clare at some stage in the near future.’

You can read more about the appointment by following this link.